Posted on January 14, 2018 by holidaymistake

You always know it’s going to be a bad storm when they name it. Usually, it’s something cute like Amy or Cindy. I knew we were screwed when the storm rolling up the east coast was called The Bomb Cyclone. I had no idea what that was but it couldn’t be good.

Calm before the storm.
Sunset Ptown

We first heard of it when we were in Provincetown on the end of Cape Cod. It was going to hit in two days: the day that we were to fly back to Seattle from Boston. It didn’t take us long to realize that this was the real deal and we quickly changed our flight to the day after the storm.

We were spending the night before the storm in Providence, RI seeing old friends. We could have driven back to Boston early, which would have been the sensible option, but we had been looking forward to this visit.

We rolled into Providence on a beautiful, crisp, sunny day with no hint of the approaching doom. We had a lovely, late night out on the town with our friends Rich and Sheryl, and still no hint of snow in the air. I woke up at 6am and looked out the window. It had only just started snowing, “H, if we go now it might be ok”. She rolled over in bed with a firm “no”. Fine by me! When I got up at 8am, it was snowing sideways with a few inches already on the ground; good thing we stayed put.

By mid-morning, the snow was piled higher, the streets were abandoned and everything was closed and we were getting hungry. We figured the big hotel restaurants might be open. I gave The Biltmore a call and they were open so we bundled up and headed out into the nor’easter. Stomping through snow drifts and shielding our face from the driving ice, we managed to make it the 4 blocks! We peeled off layers of clothing and ordered Bloody Marys from our genial server, Josh.

Bloody Mary’s inside. Plows outside

I think there is something about massive storms that make people drink heavily and this was a big one, so we would have to pace ourselves.

It wasn’t too long before our friend Rich called with a crazy plan: #abadideaforgoodfriends. “The local bar in my neighborhood is open. I’m driving down to pick you up”. It seemed unnecessarily crazy, but we were game if he was!

The valet was shocked when he pulled up and we hopped in. He deftly maneuvered through the streets, busting through snow drifts, running red lights. It didn’t matter, no one else was on the roads.

At his local, the bartender was obviously not as excited as we were to be there. We spent the afternoon drinking and talking of travels and the old days when Rich and Helen ran wild in Seattle. By late afternoon the grumpy bartender had had enough, closed down and kicked us out. The wind was howling and it was still dumping snow.

Everything else was closed so we stopped at Rich’s house for a quick one. He pulled out some old photos of the past that he and H cackled over. He insisted on driving us back, it was now or never as there was over a foot of snow on his street and it was still piling up. We had a little trouble extracting ourselves from the driveway and got stuck. I furiously shoveled around the car as we pushed, and luckily a plow came by and we were free. On the way back, we returned the karma; we were good samaritans and helped a solo female driver whose’ car was hopelessly stuck. With some heavy pushing she was back on the snow covered streets.

As we got back to The Biltmore. Our favorite waiter Josh from earlier in the day greeted us with ‘you want your usual round?!’ he was surprised we were still going strong!

After dinner we walked back to our hotel as the snow was finally subsiding at 10pm.

Bomb Cyclone you ain’t that bad, you couldn’t keep us down. 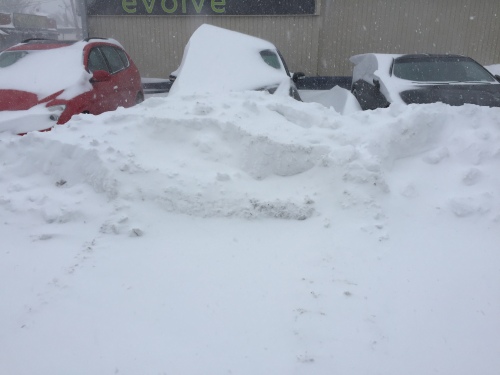