Posted on November 10, 2016 by holidaymistake

We found out just a week before that we had scored tickets to President Obama’s second inauguration; we had applied to our Senator for them months before. We had already committed to going to DC for it, so it was a bonus to get tickets that would put us a few hundred yards from the podium, rather than millions back, on The National Mall.

After we landed, we went straight to our senator’s office and were a little dismayed when the receptionist couldn’t immediately find our tickets, but after a few calls and some hunting around, she finally found them. It all seemed a little disorganized; apparently this was to be the theme for the entire trip.

We thanked her as she handed us a large envelope, and excitedly, we immediately ripped it open. Inside was a gold-lettered invitation and ticket to the main event, maps of the area and, somewhat oddly, a line-drawing of Obama; an inauguration survival kit.

The next day, after a rather late night, we still managed to get on the subway early and easily, despite the crowds. So far, so good. We disembarked at the station, a short walk to the gate, and through security – no problem.

Things began to go south as we approached our ticketed area, it was packed with people and it was unclear where to go; we were at the mercy of the masses. The crowd was so dense your arms got pinned to your side as you slowly shuffled along with the flow. After fifteen slow minutes of this, everyone ground to a stop. There was no more room to move; this was to be our spot to watch the inauguration. Not a bad spot, we were about 200 yards from The Capitol with a peek-a-boo view of the podium through some trees.

Not a bad spot, except for one major inconvenience, apparently we were under a tree that an anti-abortion right wing nut (wing nut or WN for short) had climbed earlier. Scruffy clothing, unkept, patchy facial hair; He looked like a red-neck Rip Van Winkle that just crawled out from underneath a double-wide after a ten year nap. From his perch atop the tree, clutching his homemade sign; WN proceeded to yell random anti-abortion rhetoric. Some of his favorites: “Obama is a baby killer”, “What about the dead babies?” and “Obama is the Anti-Christ”. WN shouted these throughout the speeches, marine bands and even Beyonce’s rendition of The Star Spangled Banner was not immune to his rants.

The only time we got any relief was when Chief Justice John Roberts came on stage to swear-in Obama, WN screamed “Roberts is a good man, he is against killing babies -listen to him” and he promptly shut up. If he was going to be quiet for any part of the ceremony this was the best time, the actual swearing in of The President. But as soon as Roberts left the stage, WN picked up where he had left off, with a few new improvisations; “Nancy Pelosi is the devil! – what about all the dead babies?!”

Finally the police had cleared a small perimeter around the tree and brought in a few ladders. An officer with ‘negotiator’ printed on his jacket climbed up, but the higher he went, the higher WN climbed. As he neared the top, WN’s weight was bending and starting to break branches and he was in danger of toppling out of the tree. The officers gave up and climbed down the ladder; WN was safe and in for the long haul. 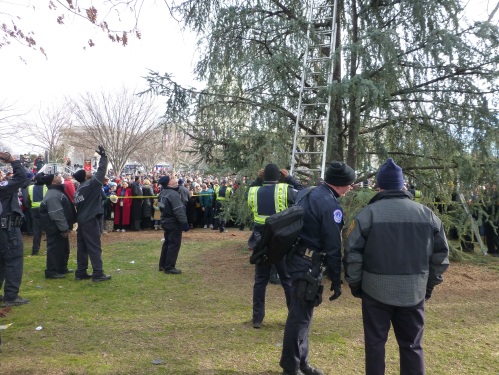 Later we found out that WN does this all the time. He climbs one of the few trees around The Capitol and starts popping off. If they know him and what he does, how did he even get through the security check-points to climb a tree without being stopped in the first place?! It is a presidential inauguration and lunatics are running around the capital climbing trees

So for two hours, WN spouted his BS message and everyone within earshot was forced to listen to him. The press took photos and wrote stories. His message got though to me; he jack-hammered it into my skull.

WN was annoying but I wasn’t going to let him get to me. It actually felt fitting and reflective of the time we are living in. A single person with an extreme agenda can cause chaos by simple means and there is nothing anyone can do to stop him.

The worst thing about it was that he won.