Never get out of the boat.

Posted on November 12, 2016 by holidaymistake

In a driving rain, I landed on the desolate sandy beach. It would have been more inviting, if not for the weather. I was glad to land, the wind was picking up, and the seas were getting angry. Also I was a little off, feeling tired, not on top of my game. This was going to be my spot for the night. I searched for the backwood campsite and found it in the dunes. It was a nice sheltered site, level with a wooden tent platform, metal food cache box and pit toilet. This was luxury compared to the beach camping I had been doing. I couldn’t really complain though; any beach camping ain’t that bad.

As I explored my accommodation for the night, I noticed a strange mound on the beach with crows circling above, so I went to investigate. It proved to be a large, recently deceased sea lion washed up on the sand. As I walked around the carcass, a chill went down my spine. His neck was ripped open and he was surrounded by a large amount of canine prints that led back to the tree line. They were fresh and large, too big to be coyote. I instantly knew what had left them; wolves! 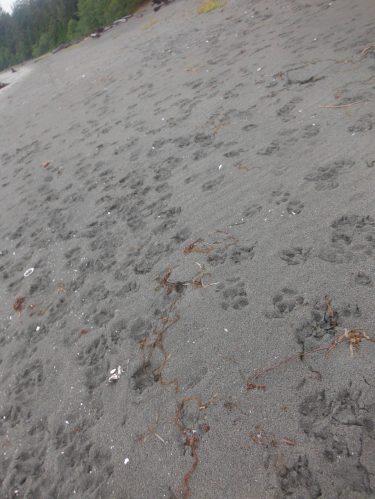 Wolves are known to roam these beaches. I spun around and nervously scanned the area, nothing. I pulled out my bear spray and grabbed a thick stick with a knot on the end; wolf club. I reconsidered, this might not be the best place to camp after all.

There was another beach beyond the headland, a few hundred yards away. I decided to recon to see if it was suitable for camping. I figured it wouldn’t take long and the nocturnal beasts wouldn’t be active in the afternoon. (Did I now think I was an expert in wolf behavior?)

I walked over the headland through dense, pristine old-growth forest and saw that the next beach was a protected place to land from the surf with a few good spots to camp on the sand. So I headed back to get my kayak in order to relocate.

As I left the forest I quickly scanned the beach with my binoculars. I saw the kayak, it was fine, so then I checked out the sea lion. My heart stopped. There was a large wolf on top, tearing its skin off and he was between me and my boat.

It suddenly hits me what an idiot I am! Basically I see a dead seal surrounded by wolf prints and I go for a stroll!? Anyone with half a mind would have immediately got off the f****** beach. I was disappointed in myself for that bone-headed decision. As I said, clearly not on my game. I knew this situation had to be resolved fast – I had to get to the kayak with all my provisions in it and launch, preferably without getting mauled.

I have had some experience with wolves in the wild, so I knew they tend to be shy of humans. Hmmmm. Unless they are defending a food stash? Again, clearly I am not an expert in wild canine behavior. But I did need a plan. And quick.

I was about three hundred yards away and I didn’t think he had seen me yet. So my cunning plan was to let him know I was there. I mean, What’s the worst that could happen? I reviewed the options.

A) He would see me and run off. Good

B) He would ignore me and continue chewing on the seal, blocking my escape route. Not good

C) He would charge me and I would have to defend myself with my weak, completely inadequate arsenal of pocket knife, bear spray, wolf club. Really bad.

Hoping wildly for the first option, I took a deep breath and shouted; deep, guttural and loud. My voice boomed and echoed across the bay. Standing tall, I started waving my arms. The wolf’s head popped up in the opposite direction; He slowly turned and looked my way for about ten seconds and then he continued tearing away at the seal.

Great, now what? I’m screwed. It was a massive seal, he could be eating for days.

Suddenly he started behaving differently, twitchy. Surprisingly, he jumped off the seal and trotted off. He took a quick look my way as he disappeared into the trees. This was my chance; I started moving quickly down the beach towards the seal.

As I pass by, I saw him along the tree line, only 75 yards away! We watched each other cautiously as we walked in opposite directions. He again disappeared into the trees. I threw everything into the cockpit, dragged the kayak into the water and clumsily launched. I was reminded of a line from a favorite movie – Never get out of the boat.

I landed at the next beach which was, in reality, only about a quarter mile away. So as I unloaded I wasn’t surprised to see wolf prints here too. In my mind I tried to reassure myself; You have camped in wolf territory before, it will be fine. Taking advantage of a lull in the rain, I started setting up my tent feet away from a pair of wolf tracks. 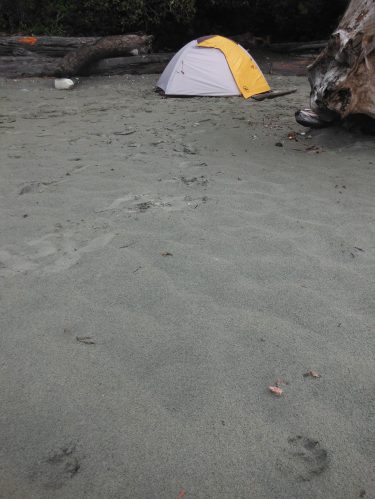 Wolf prints near the tent.

I was skittish, my head swiveled continuously, scanning the beach. I had wolf club nearby and the bear spray in my pocket, with the safety off, ready to go. A rookie mistake, I know better. As I bent down to unload the kayak, I heard the mace go off. For the second time that day I thought ‘what an Idiot’.

I closed my eyes and held my breath. After a few minutes I slowly opened my eyes. they didn’t sting; I wasn’t choking. Phew! I got lucky. Then I looked down the front of my pants and from my waist to my knees was soaked in pepper spray. Not good! The burning sensation came on quickly. I don’t know if you ever maced yourself in the nuts before. It’s a unique kind of pain. It felt as if you juiced one hundred jalapeños and poured it down the front of your pants. I ripped off my pants faster than a teenager in heat. I danced around the beach and waded out into the ocean. For days my thighs were stained deep orange, and every once and a while they would heat up like a sunburn.

I slept well that night despite reeking of mace, the driving rain, and the threat of wolf attack. Because of circumstances beyond my control I was forced to spend three nights on this beach, and I never did see another wolf.

One thought on “Never get out of the boat.”