Break camp, pack kayak and on the water by 8am. The tide was favorable and the weather always better in the morning as the southerly wind builds as the day grows.  I crossed Spieden Channel at slack tide to avoid the swift currents that plague the area on ebb and flow tides. Spieden Island has a colorful history like many islands in the San Juan archipelago. These islands, far from Washington DC authority, were populated with the independently minded or those on the run;  Civil war vets, rum runners, families, farmers.

Spieden Island was bought in the ’70’s by the Jones brothers,  who were taxidermists from Seattle. The brothers renamed the island Safari island and they imported exotic animals from around the world. They then spent their free time with friends hunting these imports. Sadly they were soon shut down.

It is said that the animals still roam the island,  but I’ve seen the island from afar before, and didn’t believe the rumors.

But, as I now approached the steep grass shores of Spieden Island, I immediately saw a herd of animals; Small deer with white spots like oversized bambis and a large group of  scruffy looking goats, looking a little out-of-place on the steep grassy knoll above the shoreline. Rumors could be true!

A few miles past ‘Safari Island’, I cruised the long harbor of Stuart Island to my spot for the next two nights. I set up camp at the end of Reid Harbor and wandered the dirt path to the historic lighthouse on the other end of the island. I walked past the one-room schoolhouse built in the late 1800’s and the old town cemetery with tombstone names like Littlewolf. The lighthouse and massive lightkeeper’s house was on turn point with sweeping views north to Canada.

With safari island and its strange inhabitants far in the distance and with dusk approaching I started a fire. The fire started easily with the sun-baked driftwood from the beach.I usually have problems starting fires which is strange, since I was a little pyro when I was young. 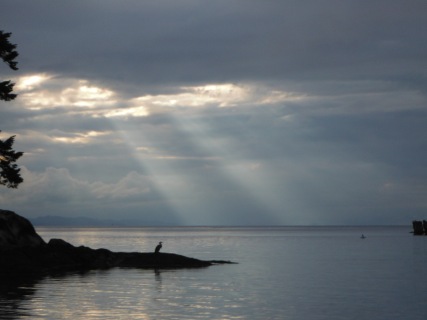 End of a stunning day.