Posted on January 30, 2019 by holidaymistake

After 10 years of service and protection during my kayak adventures, I’ve had to finally retire my Lucky White Trash Kayak Hat. LWTKH has guided me on over 25 multi-day kayak adventures on the seas of the NorthWest. Like a forcefield it has shielded me from all hazards; real, imagined and completely unknown. With its help I’ve survived massive swells in Kyuquot Sound, navigated boiling reefs and kept the wolves away at night on the western shores; LWTKH has always had my back. 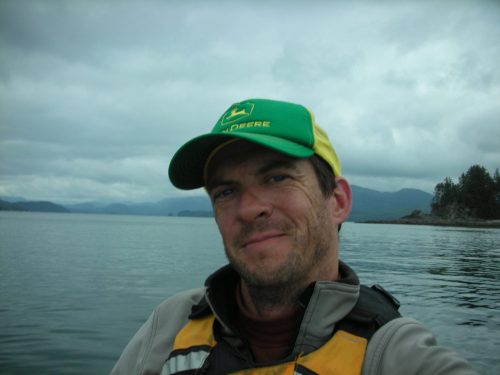 I truly believed in its supernatural guardian angel-like powers. Maybe an ancient alien race of beings left it behind? Or perhaps it was a leprechaun’s hat? I felt it could manipulate my actions and decisions unbeknownst to me and steer me clear of danger I didn’t even know existed. For example, I would get a feeling that maybe it was time to get off the water and find camp, for no real reason. Then upon landing, a vicious squall would immediately kick up.

(I do have a thing for lucky objects, or more like it, objects I deem as lucky. When we travel I collect lucky charms from different cultures and religions. I have a few or them; perhaps maybe more than a few.) 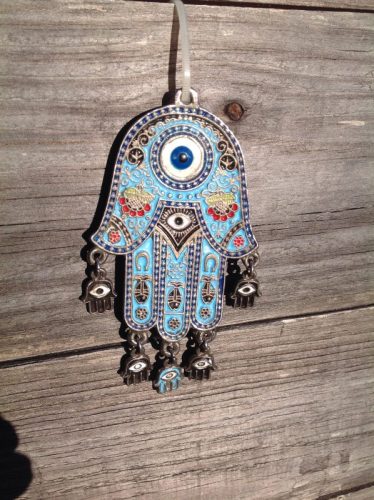 I held onto LWTKH for as long as possible. It was in bad shape, discolored, stained, material falling off, with a funky smell that wouldn’t go away. Its days were clearly numbered. 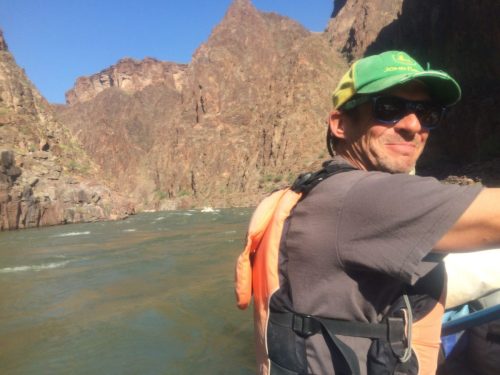 Its last trip was 9 days rafting through the Grand Canyon, which I thought would be a fitting and epic trip to retire it on. I also thought it might be helpful to have my lucky hat on the mighty Colorado; It took a beating and was about to self-destruct but it did keep me safe.

The search for a replacement took some time. It couldn’t be just any hat, it had to have an aura, a lucky glow; I wasn’t sure what I was looking for, but I knew I’d know it when I saw it.

Finally, while walking through my neighborhood Goodwill, I could see it from far across the store. A trucker hat with a blue fish on it. Bright, ugly and hipster; it definitely had a glow. I figured this hat was like a beacon; I could be seen for miles away on the water. Plus it was only $4. The new hat was christened: LUHKH; Lucky Ugly Hipster Kayak Hat. 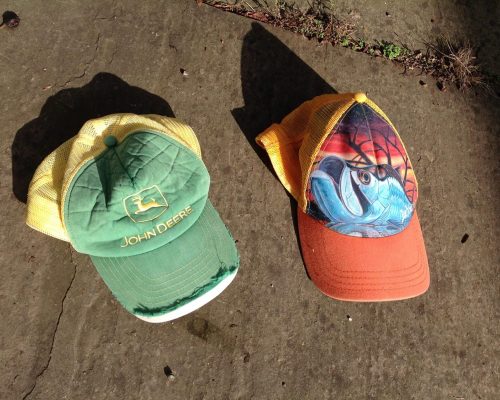 Changing of the guard

Only time will tell if LUHKH is actually lucky. The first trip will be somewhat nerve-wracking, but I have hope in its powers to guide me through perils and keep me safe; warn me of rogue waves, forecast the weather, and teleport me home if things get really bad. Now that would be some hat. 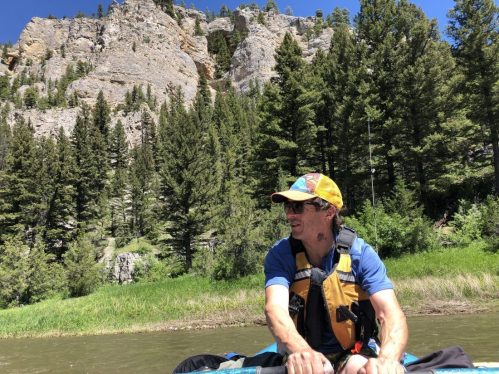 Posted on November 2, 2014 by holidaymistake

It was my first attempt to get to White Cliff Island that sits alone and exposed out in Queen Charlotte Straight. Because of this exposure, the water conditions can be turbulent, and that was the case on this day. The wind and waves were starting to kick-up; the sea was getting angry, so I was looking for an alternative campsite I had read of; a safe port in the storm.
I came upon a small bay with a cobblestone beach, matching the description of the camp I was looking for and so I landed. I poked around the tiny cove, but there was no area to set up a tent; this wasn’t the right beach.

I bushwhacked down an overgrown ‘path’ that led from the beach up through the dense woods. After a hard-fought hundred yards, I arrived at another beach filled with huge driftwood logs and a deep narrow bay. Behind the logs, a small area was scratched out for one tent. This was the camp I was looking for. 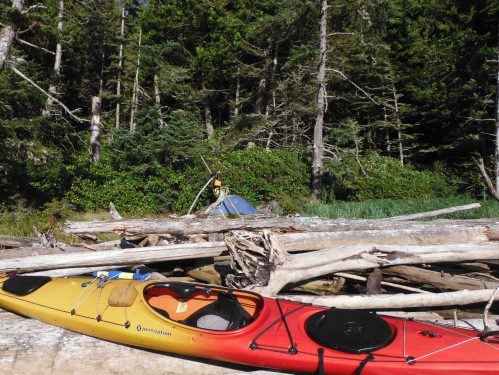 Camp – Plan B -Port in the storm

I was feeling lazy, so even though the sea conditions were worsening, I decided to kayak the short distance instead of making multiple trips through the woods carrying all my equipment. (Plus I don’t like having my kayak out-of-sight so far from camp.) I launched and paddled out of the bay and around a point and into the wind. The wind and waves were manageable at first, but that quickly changed. The waves increased with no rhyme or rhythm; the water was foaming and the wind was gusting in my face, I couldn’t turn around even if I wanted to in this mayhem. Great; now because I was too lazy to hump all my gear, I’m going to get bashed on the rocky shore. I can see the headline now “lazy kayaker pays the price”.
I took a deep breath. It was chaotic but not catastrophic; I powered through to the calm cove. It was a tiny beach littered with massive driftwood, I dragged my kayak onto the logs to keep it out of the approaching high tide and set up camp. 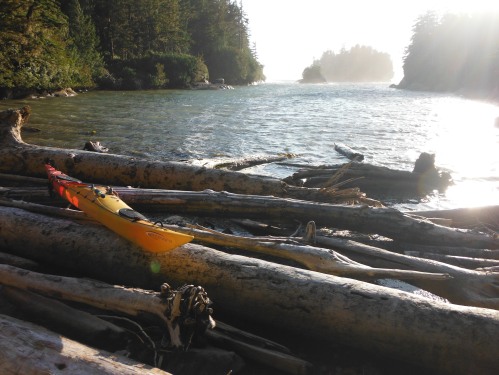 Kayak on the driftwood.

The next day as I made a second attempt to get to White Cliff, it was a little choppy as I headed out. The landing on White Cliff is said to be tricky, you have to land on a rock ledge, like a granite ramp. I would only attempt this in good conditions but again the weather worsened. So I aborted the second attempt and headed for my plan C campsite.

So I landed at Owl Island; it was nice, but now I was obsessed about getting to White Cliff. I wandered the island and caught a view out into the straight, the water was calm and the wind had died. I ran back to the kayak and launched for attempt  number 3.
It was only a few miles to the island and in the calm conditions it didn’t take me long; third time’s a charm. Now I just had to figure out how to land. The shore was rocky with white vertical walls. I searched for the elusive landing site and found a sloping, off-angle ramp with a wall on one side. I paddled hard, slid up the ramp, put my hand on the wall and jumped out of the kayak; easy. 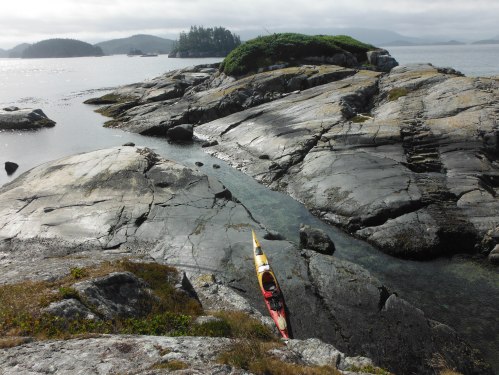 I have heard that this was a amazing place to camp and it did not disappoint. The campsite was on the top of a hill and had a 360 degree view of Queen Charlotte Straight; beautiful. I slowly unpacked the kayak and set up camp. Before long, a humpback whale passed along the shore and then another, over the course of the afternoon, ten whales in total passed by. 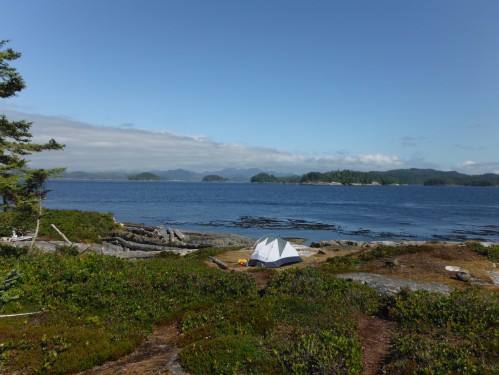 It took a few days, some bad weather and three attempts, but it was worth it; A beautiful day, a great campsite on a small island in the middle of a whale highway. 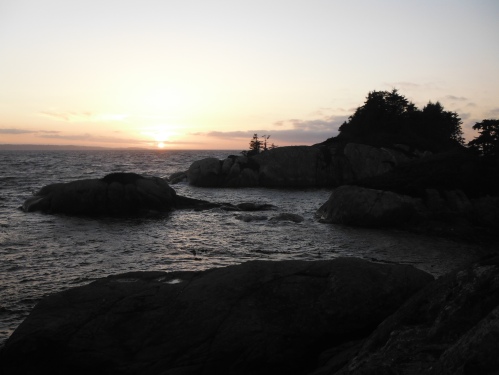 Posted on November 1, 2014 by holidaymistake

Boughton Archipelago is where the orcas spend their summer.  One of the world’s largest salmon runs, the Fraser River Salmon travels through the area, and so large numbers of orca go to gorge themselves. I was taking a six day solo kayak trip through the area, camping on small remote islands, and I was hoping to see some of them. I have seen Orca from my kayak before, but from a distance or only a quick glimpse, so I wanted to get a closer look. But not too close; they are called Killer Whales after all. 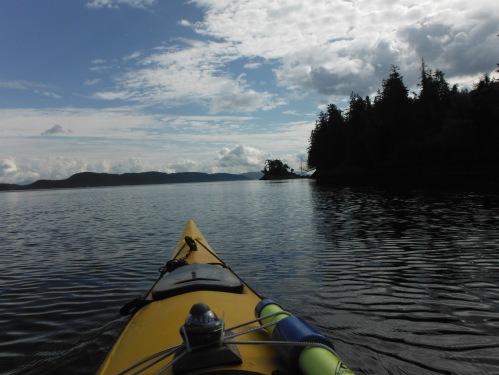 I launched from Telegraph Cove  and after I fought through the turbulent water west of Hanson Island I got into mellow Blackfish Sound, where the Orca frequent. It was a beautiful day: no wind, mostly sunny, calm seas. After a short rest, I started to paddle across the Sound and I kept hearing a loud, deep, hollow booming sound, reverberating across the water like a distant canon firing. What is that noise? I stopped paddling and drifted, looking for the source. Far in the distance, I saw a humpback whale breach and land with a enormous splash, followed by a loud boom that echoed throughout the Sound.  For the next few minutes whales were launching themselves into the air; something you don’t see everyday.

When the show was over, I continued across the sound, and before long I saw plumes of water and the unmistable sound of whales taking a deep breath as they surface.  I realized it was large pod of Orca slowly moving towards me.  If they stayed on course, it looked as if they were going to pass in front of me, so I stopped paddling. There were at least twelve whales traveling close together, swimming slowly  and surfacing often.

Three male Orcas came within one hundred yards from the kayak, their dorsal fins slowly rising from the water. The male dorsel fin is uncurved and can be six foot tall, an odd but imposing sight from my kayak. I was only slightly uncomfortable because the pod passed safely in front of my bow.

When the pod was in the distance, I was just about to start paddling again when a loud noise behind me. I twisted around in the kayak cockpit to see a humpback surfacing fifty yards directly astern. I spun the kayak 180 and watched a few more humpbacks with distinctive tiny dorsal fin and humped backs.

I  finally left the Sound and glided to my campsite through a maze of small islands and bays. I noticed a small splash in front me, moments later another closer; it looked like a small Harbor Porpoise. He surfaced again fifty feet directly in front of me, heading right for me, collision course.  I fumbled for my camera, as he surfaced six feet to port; I could have hit him with my paddle. I took a picture a little late, missed the shot.

Thats why I came, to see some Orca. I got my wish and then some; I could not believe my luck, a pod of orca in front, followed immediately by humpbacks behind and  finished up with a suicidal porpoice- The trifecta and it’s only day one!