Posted on January 17, 2016 by holidaymistake

I woke up in the middle of the night and had to take a pee, bad. It was pitch dark, I rolled out of bed and groped for the bathroom door. Finding it, I pulled the handle and opened the door. A blinding light hit me, so I closed my eyes and walked in thinking, “why did I leave the light on in the bathroom?” The door shut behind me as I slowly opened my eyes.

What I saw was not what I expected; no toilet, no shower, no sink, but I was in a hallway? As the fog in my head cleared, I realized that I had opened the wrong door and had walked out into the hallway of the hotel. I quickly grabbed the room door, locked.

OK, I just locked myself out of my hotel room in the middle of the night. Not a big deal. Except for the fact that I was buck-ass naked and I could hear the elevator coming up from the lobby. A bell rang as it passed a floor. I heard two bells and we were on the third floor. Immediately, it all became crystal clear.

I started pounding on the door frantically, “Helen let me in!!”

A sleepy voice from inside “Chris?  Is that you? What are you doing outside?” I heard the third elevator bell ring.  “Just let me in quick!” The elevator doors opened around the corner down the hall. “H! Let me in – hurry!” Voices were approaching. Just in the nick of time, the room door opened and I ran in, greeted by “What is going on?”

Confused and clueless I answered. “I really don’t know what just happened but I was out in the hallway naked.” As Helen tucked back into bed I heard the all too familiar disapproving grunt. A simple grunt that speaks volumes = you’re an idiot, I’m too tired to deal, I don’t want to know what just happened.
When I woke up on New Year’s Day, I asked the question I already knew the answer to. “I really hope I was dreaming…but did I lock myself out of the room naked?” Helen “It was not a dream” 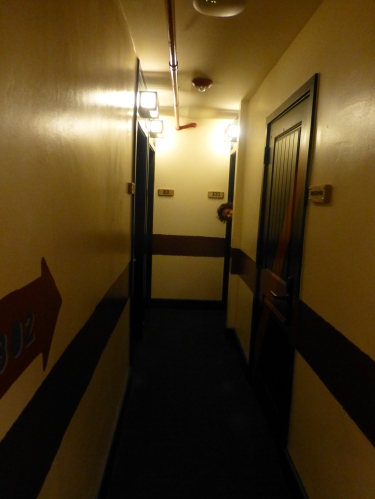