Posted on October 22, 2013 by holidaymistake

On this night we were staying atop the ten thousand foot Sani Pass in the country of Lesotho. Two major problems with this. First, it’s a 30 km rugged, steep 4×4 only, one lane dirt road with tight switchbacks. Second we had to cross the South African border and it closes at six pm, and we were running late, as usual.

The rural road was good for once as we approached the mountains and I was on it, flying 120 km/hr easy, the border can’t be far now. Suddenly, Helen screams “Dirt road! ” Without any warning the road goes from paved to rutted gravel road. We hit it hard, kicking up dirt and rocks; I luckily regained control as we passed some bewildered locals on the side of the road, in front of some abandoned building: random. I felt bad as they got dusted from all the dirt I was kicking up.

The road was bad from the beginning but we made it to the border crossing with time to spare. The pressure was off now we just had to get to the top and the Lesotho border by dark. The road clinged to the steep valley wall as we climbed. One side of the road was rock wall, the other side was a vertical cliff. I never got the truck out of second gear low, it was full-on. The twilight sun sent long shadows down the valley as we ascended slowly. Towards the top the switchbacks started, turns so tight you had to perform a three point turn maneuver to make it, doing everything possible to keep traction and not spin the wheels.

I was loving it, Helen not so much.

We reached the top with the sun barely above the horizon. The Lesotho border is not your typical border crossing; a remnant of a fence with no gate. We walked into the border post to see a handful of guys in sweats eating some sort of maize porridge out of a crock pot; they were super nice, stamped our passports and that was it.

We were staying at the Sani Pass hotel next door to the border. It had a few traditional huts for accommodation, with a small restaurant/pub. It’s claim to fame is being the highest pub in Africa; Funky place, friendly local staff. It’s cold at that elevation even in Africa, the pub and huts were heated with stoves that you fed with huge chunks of raw coal, with no lights after ten pm when they turned the generator off. 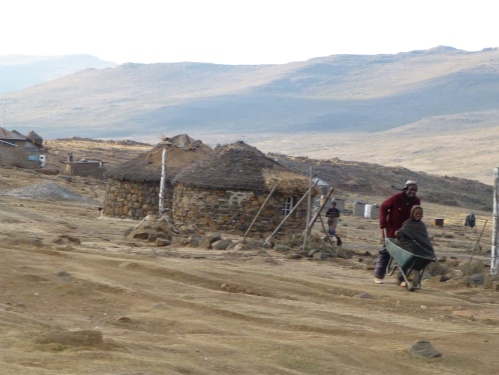 As we ate dinner, a thick fog crept up the valley and engulfed the barren landscape around the hotel. After a few beers at the pub we went back to the rondeval hut. I loaded up the stove to keep us warm for the evening and we were in bed when the generator turned off. With the odd smell of burnt coal in the air, I faded off to sleep dreaming of driving back down the pass the following morning.