Posted on April 9, 2016 by holidaymistake

We were taking the long overnight train from Bagan to Yangon, Myanmar. We booked the tickets weeks before for one of the old beat-up British sleeper cars with four sleeper berths. The conductor opened the door, and an English couple were already inside, and he said, “actually we booked all four spots in this car”. The conductor looked at all our tickets, the carriage had been double-booked. The Englishman said again, “We booked all four spots, so sorry”. Clearly there were only 2 of them; We both gave him a look; that’s not going to happen. I thought to myself what a #!?! Was he just going to leave fellow travelers on the platform when they had two spots open? Luckily, before it all kicked off, the conductor looked at his clip-board, and motioned us to the next car that had beds available.

We settled in and a nice kid from Singapore joined us and we chatted about our travels around Myanmar. Later, we were all ready to try and get some sleep, when the train made a stop. I stuck my head out the window and noticed two young local men get into the carriage of our friends next door, the door shut and the train immediately departed. Looks like the young English couple was going to have some company for the evening after all. There was no way to leave the car once the train was moving and there wasn’t another stop until mid-morning.

When the train finally arrived in Yangon, as we passed their carriage, I slowed and took a peek in. The carriage looked well-worn and the women was still packing, looking disheveled and exhausted. She saw me out the window and I gave her a big smile; travel karma got you!

Sunset on the train. Good karma

Posted on April 8, 2016 by holidaymistake

The rail system in Myanmar was built by British in the late 1940s and has fallen into disrepair over the decades. It is notoriously slow, always late and an extremely rough ride. We were taking the overnight train from Bagen to Yangon, a seventeen hour ride through the jungles of Burma.

We climbed aboard and were joined by a 20-something kid from Singapore. Together we checked out our home for the night; The 50-year old ‘upper-class’ sleeper carriage had four seats underneath a sleeping shelf on each side. With a fight, the seats could be turned into a bed. It had a bathroom with a sink with no water and when you opened up the toilet lid there was just a hole through the floor to the tracks below. We opened the windows wide, were pleasantly surprised when the ceiling fan worked; the train seemed relatively comfortable for being a rolling antique.

At the station, we had loaded up on the essentials; water, snacks and beer. We got out the books, camera and sustenance out and settled in for the long trip.

The train slowly groaned to a start, bumping along the track. It certainly was not a bullet train, we were traveling at about 25 mph. Looking out the window we saw small farms with grass and mud-brick homes. Small kids would stand by the tracks and wave as we passed. We didn’t see a car or paved road for hours. 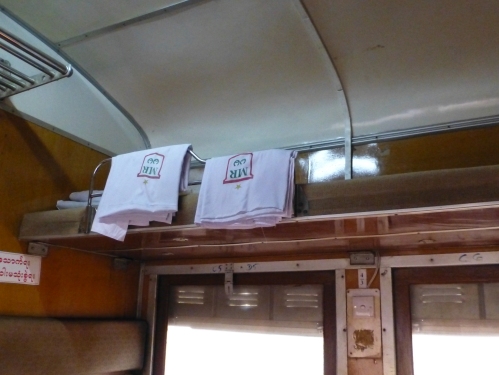 We tried to sleep on the upper bunks; basically enlarged luggage racks. Every time I drifted off, I was jolted awake by what sounded like someone banging on the floor with a sledgehammer. During the night you’d be woken by the train alarmingly rocking and rolling from side to side; it was like sleeping through a massive earthquake. You were bounced inches in the air off the bed, slammed into the wall and then almost thrown right off. I resorted to sleeping on my stomach, arms and legs outstretched, like a starfish.

We arrived at Yangon almost two hours late. We were tired and dazed, but OK considering we had just been trapped in an over-sized washing machine for nineteen hours. Then we stepped off the train into 106 degree heat.

Posted on April 1, 2016 by holidaymistake

We were on the overnight train to Hanoi in a sleeper car with four bunks. We had the bottom two beds and drifted off to sleep before anyone joined us. In the middle of the night, the door opened and a couple walked in. I was out of it; I barely opened my eyes and saw a blurry vision of a young woman staring down at me. Only her eyes were visible; She wore a hat and a colorful face mask over her mouth and nose; A bizarre sight in the middle of the night. Almost all Vietnamese women wear these masks for the pollution and to keep the sun off their faces. Opposite to western views of beauty, in Vietnamese culture it is desirable for women to have pale, white skin.

She was freaking me out, at one point she sat down on the foot of my bed, still staring down at me; was I dreaming? Luckily, her husband returned with the conductor, they had the wrong room and they hurried off. Moments later, another young couple with a baby entered. She quickly tossed the baby on the bunk above me and scrambled up after with ease. The husband jumped on the bed above Helen, and despite a few loud cries from the baby, I quickly fell back asleep.

Posted on November 30, 2013 by holidaymistake

This year we weren’t up for the traditional thanksgiving; we went with an unconventional holiday celebration. We were itching to get out-of-town and so we rented a small cabin in the mountains just outside Mt Rainier National Park. It had snowed up there recently and the weather forecast was for sun. We drove through the evergreen forest at twilight;  the cold winter sun set long shadows over the road, the small towns seemed deserted on this thanksgiving eve. It was dark by the time we pulled up to the cabin.

The next morning was  beautiful,  full sun;  the sky was a washed-out blue, almost white, ice blue.   There is only one road open in Mt Rainier during the winter, the road to paradise. Paradise is at the base of Mt. Rainier with a grand old lodge, visitor center and is the jumping off spot for climbing Rainier. The roads winds through old growth pine, climbing to sub alpine along rugged-boulder filled rivers. The road ends in the snow  and Rainier at 14000 ft looms massive in front of you, We took a short hike in the snow;  truly a mountain paradise. 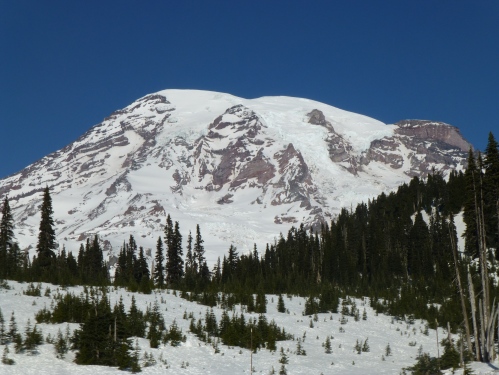 On the way back to the cabin, we turned up a dirt-logging road to look for our Christmas tree. We purchased that allows you to cut down a tree in the state forest for $5.  We bumped along the road looking for a suitable tree, we didn’t even have to leave the car, a drive-thru tree farm. We saw a nice sized tree just off the side of the road; unfortunately it appeared to be in the middle of an illegal dump site, with trash strewn about. Climbing over discarded tires, even though we were actually cutting it down, it almost felt like we were saving it from a toxic fate. We wrestled the tree on top of our car and tied it down; which was actually a bit of a chore as the tree was over twelve feet tall. 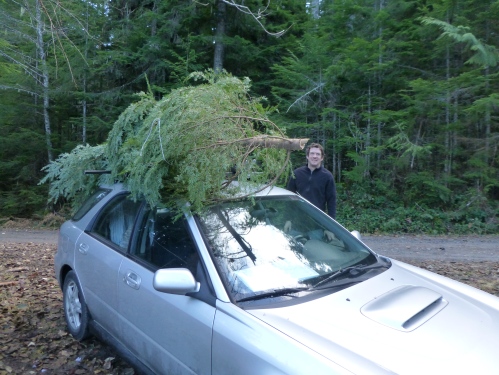 We then drove to Elbe,(population 29) and had thanksgiving dinner in an old rail car converted into a restaurant. I had the traditional turkey dinner with all the trimmings, not bad considering I was eating on a train. After dinner we went to a local watering hole, which was surprisingly busy with Elbians sharing a potluck dinner. We headed back to the cabin early to sit in the hot tub looking at super bright stars in the clear mountain sky; I can’t think of a better way to spend thanksgiving; paradise indeed. 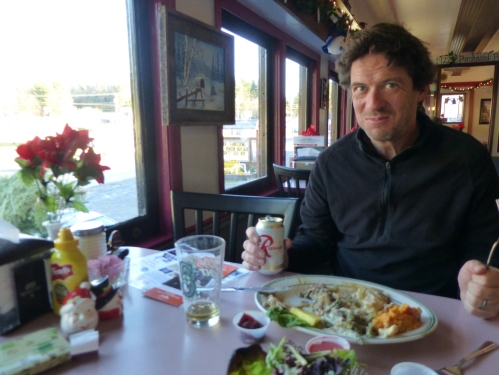 Thanksgiving dinner with a Rainier beer in a train