It’s been eight years since I’ve been out to Kyuquot Sound on the NW coast of Vancouver Island, BC. I had a few minor issues on that first trip; actually to be more accurate, Kyuquot kicked my butt. I came stumbling out of the woods reeling and stunned the first time around; The PTSD caused me to paddle calmer waters for the next few years.

Even so, I was touched by the remote, brutal coastal wilderness I had just survived and I knew I would be back; I felt I had some unfinished business out there. I was not going to be a one and done. This time around I’m doubling down and going further… further out into the wilderness, further off the grid and for longer too: 8 days.

What I also remembered from last time, is that it takes forever to get to Kyuquot. After several long highways, a border crossing and a two hour ferry, I finally turned onto the road that leads to the launch. It was 8 pm, I had left Seattle 12 hours earlier and it was still 100 kilometers left to go on a primitive logging road through the woods. I bounced and slid my way along at twilight hoping not to get lost. I pulled into camp just after 10pm and set up camp on the banks of Kyuquot Sound. 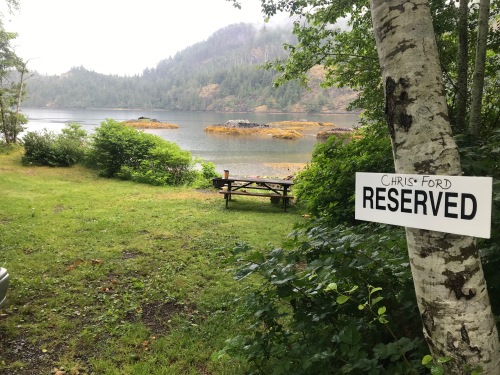 Sunrise; Broke camp, loaded up the kayak and was on the water just after 10am. It was cloudy with a light drizzle but calm winds and seas. Good, almost perfect conditions, as I had an ambitious plan to paddle 14 miles to an island campsite just off the coast. It was deja vu; the exact same conditions when I launched 8 years ago. As I pushed off the beach I was excited, yet nervously curious about the upcoming adventure and totally ready to conquer Kyuquot Sound.