A is for anaphylaxis and Austin. Peanut Trilogy part 2

Posted on February 12, 2019 by holidaymistake

We were in Austin, Texas for South by Southwest (SXSW) music conference and to visit my cousin Amy. We grabbed a quick breakfast, and I had a bite of Helen’s veggie BBQ sandwich. Big mistake. Before too long there was a slight tingle in my mouth; almost an electrical sensation. That could only mean one thing, symptom #1. I had just ingested some form of nut. Initially it wasn’t as strong as some reactions, so I decided to wait and see what happened and didn’t mention it to Helen. But it didn’t take her long to figure it out though; she knows me well. I confessed and she was instantly concerned, rapidly asking questions about my condition.

It was a slow creeper reaction, not the kick-in-the-face type I have experienced before, but my condition was worsening. Round 2 of symptoms were hitting hard; throat irritated, sneezing, nose running. We were still trying to decide the best course of action, so Helen ran into a busy restaurant to get me a glass of water. When the hostess said “it will be a minute, I have to go find a plastic cup”, I could hear her shouting, “My husband is going into anaphylactic shock. Just give me some #*+#ing water.”

While I waited, the 3rd set of symptoms showed up: Massive hives, the size of silver dollars started forming on the top of my head. Obviously, this was a bad sign. I was crying, sweating, salivating uncontrollably; my body was in now full revolt. Quickly, the decision was made to use the Epi-pen and call my cousin for a ride to hospital, knowing that if things got worse, we would have to call an ambulance. As I got ready to administer the adrenaline shot, Helen made a panicky call to Amy.

The correct way to administer an Epi-pen, is with arm outstretched at shoulder height, you then drop your arm in a pendulum motion and drive the syringe deep into your upper thigh. It has to be hard enough to go through clothing and into the muscle. Committing to do this is not easy and I had a few false starts. I could start to feel the hives move down the back of my head to my shoulders. Time to go! I finally mustered the nerve, lifted my arm, then dropped it, driving the syringe into my quad. Painful? Yes! The worst part is you have to leave it in for 30 seconds; Counting it off felt like an eternity. The first thing you instinctively want to do is pull it out and scream and fall down in a fetal position. I felt a little queasy as I counted it out, pulled it out and then almost fainted at the sight of the long needle. I still get the chills when I think about it.

Amy luckily arrived within minutes and dropped us off at the ER as distressing symptoms #5 began. Hives moving south down my torso. One good thing; the hives never developed on my face. One bad thing; my eyes were starting to swell shut. Another good thing about allergy induced anaphylactic shock, there is never a wait at the ER. All you have to say is two words. Peanut allergy.

The experienced nurse immediately began to hook me up to an I.V. It’s always been hard for nurses to get needles in my vein, for some reason. She is having a hard time, she sticks the needle in and it starts bleeding, bleeding a lot. No luck, she pulls it out. I’ve gotten queasy in my old age and as she tries a second time, I tell her calmly. “Heads up- I’m going to be sick in about 30 seconds.” She gets it under control just in time. I stand up, walk over to the sink and vomit.

I lay back on the hospital bed, not feeling particularly great, but the allergic reaction is now on the decline and my body is calming down. Thankfully this was still a mild reaction and the worst of the symptoms didn’t come. The dreaded #6 (throat swells shut and constricted lungs take in less oxygen) and the catastrophic #7 (breathing labored, and as less oxygen reaches your brain; you fog out as you slip unconscious.) I won’t get into the final symptom.

The nurse returns with what looked like a tube of caulking. She has a strange look on her face, with a hint of a smirk. As she mixes the contents of the tubes with water into large styrofoam cups she explains. “This is charcoal, it absorbs the nut toxins in your stomach. We use it for drug overdoses too. It’s not the best tasting and you have to drink them both.” And with that she hands me two large cups filled with the dark mixture. “You’re doing good, once you finish these you should be able to leave.”
Great. Easy. I want out of this hospital. 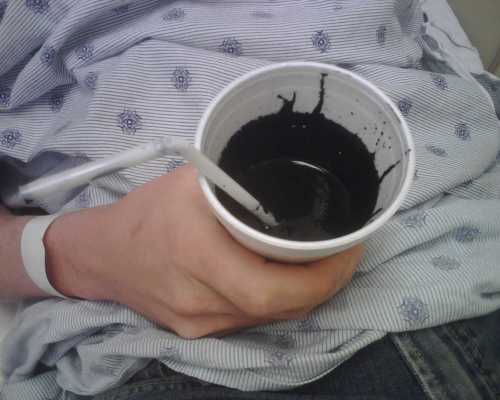 After I had a sip, I had a different thought; this is not going to be easy. It was thick, gritty and tasted like burnt charcoal. It turned my teeth and lips black. But I drank them as fast as I could. My tummy was on the spin cycle when the nurse came back in. “How was that? Yummy? How do you feel?” 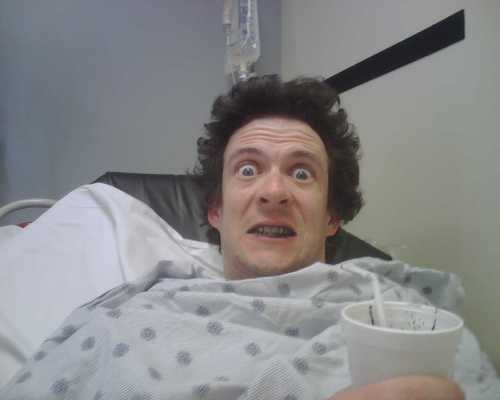 My luck, I get a wise-ass nurse. “I feel fine,” I lied. She left and I began to sweat, my stomach doing somersaults; I ran to the toilet and barfed up the charcoal. It tasted even worse on the way up. I sat back on the bed and felt a little better. The nurse checked in again, “you ok?” There was no way I was telling her the truth; I was not going to drink any more charcoal milkshake. I was discharged.

Like after most allergic reactions, I was exhausted afterwards. It felt like I ran a marathon, my whole body was spent, so I went back to the hotel for a nap while Helen and Amy went for lunch. When I woke up, I felt a lot better, and was starving. So we went out for a bite in one of the bars which were holding industry parties for the SXSW music bigwigs. When the bartender noticed the hospital bracelet I had forgotten to cut off, he asked me “So is that for an exclusive party?” I answered wryly, “you could say that.”