Posted on August 8, 2016 by holidaymistake

On our first night night in Myanmar, we were staying in a floating hotel on the Irrawaddy River, just outside of Mandalay. The taxi from the airport dropped us off riverside; It was a half mile wide with fast-flowing brown water. Dilapidated boats of all sizes were tied up to the muddy river bank, many housing families with their drying clothes hanging from boat lines. All the boats were rusted, dreary and listing. All except one, our hotel. The Karaweik Floating Hotel. It looked like a traditional Royal Barge, on acid: Gold, multi-level with white life-size elephant statues and two massive mythical birds on it’s bow, covered in lights. It looked like it just floated in from Vegas. 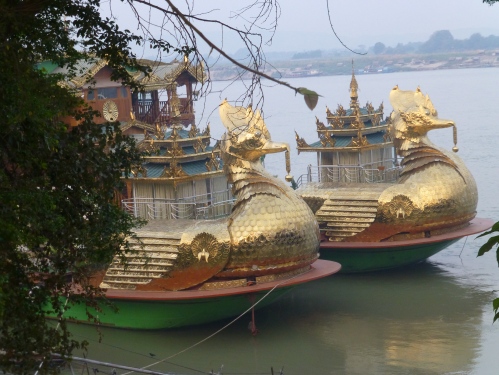 We walked down the gangplank and into the lobby where a Burmese wedding had just happened. The bride was in a colorful long-flowing dress and fancy, sparkly heeled flip-flops covered in fake gem stones. The men wore dress shirts with longyi, the traditional long dress worn by men. They also wore flip flop without the bling. They were all excitedly running about the lobby and through the hallways.

When we managed to get to the front desk, they asked if we were here for the cruise. Confused, we answered that we were are staying at the hotel. “OK, but you can go on the two hour cruise if you want to. We leave in a hour.” 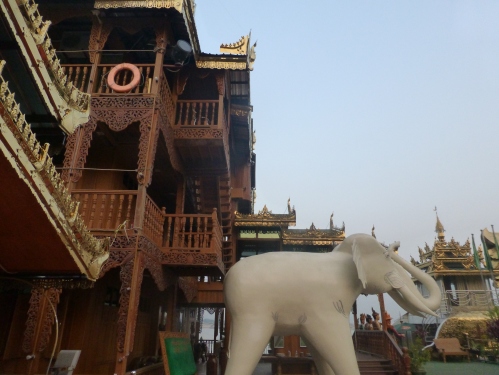 This was news to us, clearly if we had arrived an hour later we would have seen our hotel sail off downriver. There was no mention of this when we had booked.
The rest of our conversation at the front desk was lost in translation. Neither side had any understanding of the other. The bell boy was clearly confused from the start. Now the woman behind the desk kept trying to order us a cab, “you want a taxi now?”.

Conversations went back and forth but somehow we got checked in and got the room key. The room was nice with dark teak walls, with a door opening up onto the deck with a table and chairs overlooking the river. Inside was a table with fruit, two life preservers and a TV with only a few channels. The local channel was an out-of-focus close up of a monk chanting. There was also a K-pop station, Korean MTV. These two channels could not have been any different. 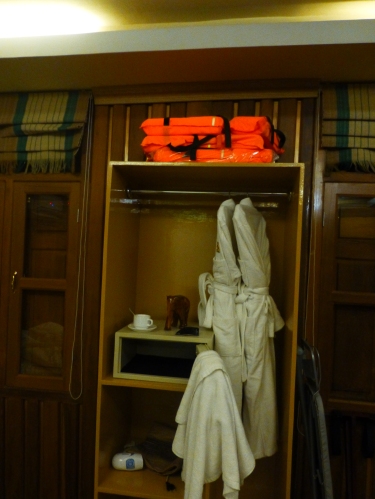 In the evening we went up to the dining room as the nightly puppet show was just finishing up. Two puppeteers stood behind a small screen and manipulated strings as the puppets jerked and flailed about. Local songs played over the outdated, fuzzy sound system. Strange is the only way to describe this spectacle.

The show ended and the two families watching, left. We were the only ones in a room with a dozen large empty tables around us. So we ordered booze to go and the waiter insisted on ceremoniously leading us to our room with the beer and a bowl of fruit on a tray. We sat drinking on the deck and made a plan for the following day while watching the Irrawaddy River flow by.

It was full of surprises and contradictions. The first of many was the floating hotel, it was just inexplicably strange; Twilight Zone plus David Lynch strange. The dirt-colored river was disconcerting. The staff was bizarre. I had nightmares about the puppet show.

We loved it; It was everything we had hoped for Myanmar.

After our first night in Myanmar, we realized we weren’t in Kansas anymore