Posted on June 6, 2016 by holidaymistake

Sunset on the train, Myanmar

I always like to indulge in the local brew when I travel. On our last trip I began an appreciation of SE Asian beers; even though they are seldom cold and taste more like a bud than a local craft beer. But they are surprisingly refreshing in the heat and so in every country we visited (six total), I tried every local beer I could get my hands on.

In Vietnam there was Biere La Rue and Saigon Beer. In Hanoi there is an area named Beer Corner that sounded right up my alley. So we walked through the maze of narrow streets to get a ‘Fresh’ beer, or two. The area was packed with people and tiny cafes with tables that spilled out onto the sidewalk. We sat down on short plastic stools at a small plastic table and watched the throngs of young Vietnamese parade down the street.

Myanmar Beer came in 40-ouncer’s and were dirt cheap but always served lukewarm. I brought an ample supply of Myanmar 40’s for our 16 hour train trip. Drank a few warm ones on the slow boat down the Irrawaddy River. Had some delivered to our hotel room in Mandalay. It was over 100 degrees every day; warm Myanmar saved me. 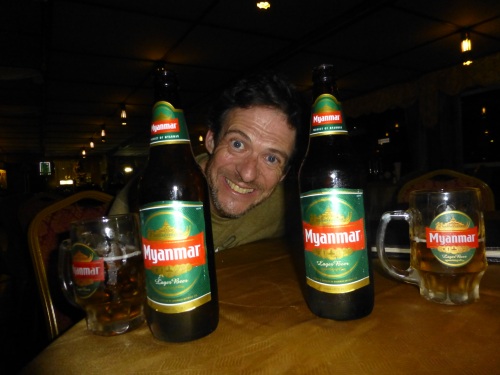 Maybe a few too many Myanmar beers

Sri Lanka had Lion Beer, my favorite. Light and crisp and with only a few Sri Lankan beers to choose from, Lion it was. Lions are not indigenous to Sri Lanka, but they are the symbolic symbol of the country, a mythical lion adorns their flag. On our last night in SE Asia we had dinner in Galle and they only had Heineken. What, no Lion? I was appalled. But I forced down a few, against my will.

Back at home now, drinking ice-cold, organic, craft, small batch, farm to table IPAs. They’re nice, but I still have a soft spot for those warm Myanmar 40-ouncers.

Chinese beer on the plane to Beijing

One thought on “Beer”