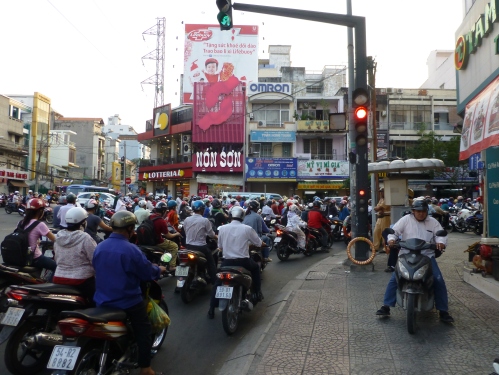 Saigon is the city of ten million scooters; everyone owns one. The streets flow thick with them, like water in a river. They buzz around, beeping their horns in warning. If the street gets too full, they just hop onto the sidewalk and dodge around pedestrians. Traffic laws are either non existent and not enforced, stopping for traffic lights appears entirely optional.

Entire families ride on one scooter. Mom sits side-saddle with an infant on her lap, a toddler squished between her and Dad, who is driving, with the oldest kid standing in front, between the handle bars. And only the parents have helmets on. Most American parents would have a coronary watching them shoot into heavy traffic.

Crossing the street is a trick. The locals make it look easy, without hesitation or looking, they walk out crossing diagonally, without a care in the world. We often saw tourists paralyzed on the curb unable to cross.

We stand shoulder to shoulder, getting up the nerve to make that first step. There is no break in the stream of scooters, you just have to go for it. If you walk slowly and steady at a consistent speed, the scooters flow around you like water, a two-wheeled version of fluid dynamics. As crazy as it sounds, it’s best not to look at the traffic bearing down on you.

We survived the streets of Saigon and by the time we got to Hanoi we were crossing street like locals; eyes forward.