Camping on the Moon.

Posted on October 31, 2015 by holidaymistake

We hiked up and over the gypsum sand dunes that stretched for as far as you could see. It looked like the moon with little vegetation, and pure white lizards skittering about.

But while it may have looked like the moon, it felt like the face of the sun. It was only 10 am as we were hiking with all our gear to a backcountry campsite and the temperature was already above 100 degrees; the sweat was pouring from my brow. We were in White Sands National Park, New Mexico, camping in the dunes under a full moon. If we didn’t succumb to heat stroke first.

Finally after a few, very hot, long miles, we found the campsite.  Withering under the relentless sun, I was chugged down water as fast as I was sweating it out. We put up the tent in record time and retreated back to the air-conditioned car.

On summer full moon nights, The National Park puts on open air concerts. Tonight was a cello quartet playing as the sun set and the moon rose; huge and golden over the pure white sand. Parents laid down blankets as kids ran up and tumbled down the dunes.

The musicians weren’t your traditional string quartet, they played rock covers; Beatles, Nirvana and Black Keys rather than Beethoven. An unusual band in a unusual setting.

As the moon rose high in the sky it lit up the white landscape like daylight; The desert landscape looked like a faded black and white picture.

Finally the show ended and we hiked back to camp; There was no trail over the dunes, just a post every so often to show the way. Even with the strong moonlight, It was hard to route- find; All dunes look the same at night. We zig-zagged our way back to the campsite.

Before we crawled in the tent to sleep, we shared the final beer laying on our backs in the sand, staring at a sky filled with stars.

All too soon, we reluctantly rolled out of our tent to catch sunrise; but at least it was cooler pre-dawn; the coolest we had been since arriving in New Mexico. It was eerily quiet, no wind, no movement on the desolate landscape.

As the sun rose orange through the wispy clouds in the east, the moon set in the west; they were identical, a mirror image.

Later that day we had to try the popular White Sands sport of sand-sledding: sliding down the gypsum dunes on a plastic saucer. It’s fun, although the hike up steep dunes in the heat can kill you!

I wouldn’t call the ride down fast; it’s slow motion sledding. We waxed the bottom of the sled for more speed. It didn’t help; I even managed to fall off in slow motion. 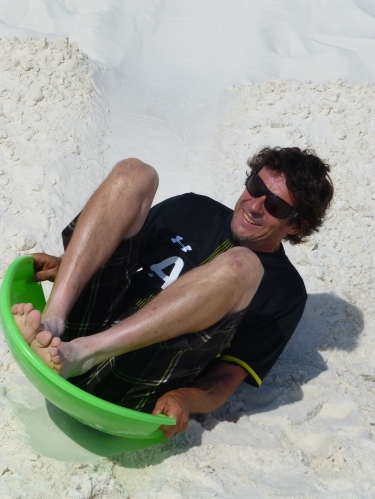 We broke camp and left driving through the lunar landscape, sand blowing across the road. Every living thing was ducking for cover in the extreme heat. An inhospitable world.  It is easy to see why NASA used White Sands to train Astronauts for Apollo missions, it is a different planet.