Hydro Virgins at the Water Follies

Posted on September 19, 2014 by holidaymistake

We were in, when our friend Erin invited us to the 49th annual Water Follies (better known as ‘BOATS!’) to watch the hydro races in Richland, WA. Actually, we might have even invited ourselves. We have wanted to go for years but hadn’t had the opportunity.

Hydros are a Northwest tradition, with most races on the west coast; most people in the other parts of the country have no idea what a hydro race even is. Hydroplane races involve turbine-powered high-speed boats that race on a large circular course marked with buoys, skimming on the surface of the water at speeds in excess of 200 mph. It’s like Nascar on the water; what could be better?

Eight of us and two dogs traveled from Seattle to Richland, and we all stayed with Erin’s parents, Micky and Luana. Every year their house is invaded By Erin and her brother’s friends who fill up the spare rooms and couches; we set up our tent in the backyard. Micky and Luana are part-saints, part-gluttons-for-punishment. Micky went out early every morning to the coffee shop to fill up a huge thermos with coffee for all of us. He would drive us to and fro from the local drinking establishments, whilst Luana kept us well fed with home-made dinner and bar-b-que.

On Race day, we arrived early and set up camp along the shore of the Columbia River. We set up the canopy, got out the lawn chairs and lathered up with sunscreen. Here the river is over a mile wide and  has a slow current; perfect for Hydro racing.

There were races all day and the first one was about to start. The course was directly in front of us, less than one hundred yards out. We waded out into the river, up to our knees, as the starting pistol went off; Can’t think of many other sporting events you watch standing in a river. The boats quickly rounded the far corner and were at full speed when they passed us. They skittered across the surface of the water, kicking up a huge rooster tail of water behind them. They are quieter than you would think; the engine had a high-pitch whine like a muffled jet engine, but they sure did haul ass. 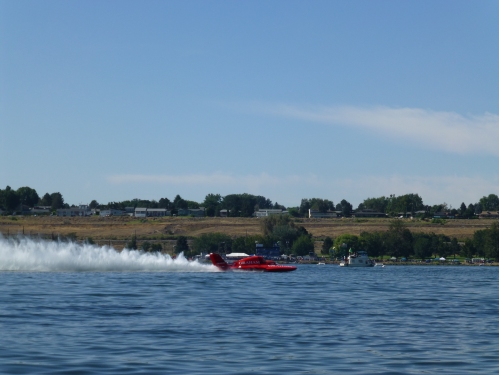 We waded out to watch all the races, unless, of course, we were in the beer garden. We had to stay hydrated after all. The beer garden was a mixture of crappy music, sunburned skin and bad tattoos, but the beers were cold and the people-watching was epic.

Rules of the beer garden.

Meanwhile back on the racecourse, there were crashes, sinking boats, controversies. After one crash, a boat had a huge hole on its pontoon, the pit crew repaired it with duct tape, and yet the boat still managed to come back to win the whole thing. After more drama than most years, the races ended and we packed up our camp and headed home. The hydro virgins had survived their first Follies (relatively) unscathed.