Posted on February 10, 2014 by holidaymistake

Waited in line for the train ticket, herded onto the train like cattle, waited in a chaotic long line to get into the stadium. Champagne problem! We were going to the Super Bowl and nothing was going to dampen our spirits; we were ecstatic! We maneuvered through the boisterous crowd of eighty thousand and found our seats at the very top, the last row. We were on the fifty yard line and had a surprisingly great, birds-eye view. 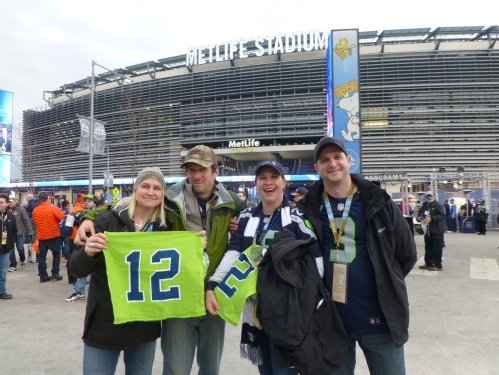 The game went our way from the beginning, it could not have gone better and it kept the pre-game obnoxious Bronco fan next to me quiet. It was a welcome change, as most of the Seahawks games this season have been nail-biters. Not the most competitive Super Bowl, but as a fan of the team on top, it was the best Super Bowl ever. It was all but over in the third and we could start to relax and celebrate. We were in full party mode when the game ended and headed down to the field to watch the trophy ceremony. The Bronco fans were gone and we were surrounded by Hawks fans dressed head to toe in blue and green. 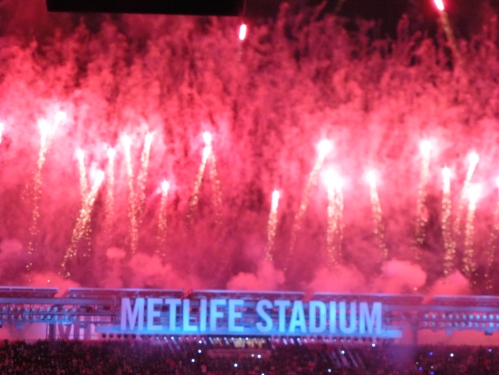 Shortly after the game ended we were told to stay in the stadium because of the long lines at the train station. We wandered around for about an hour but got bored quick, all the shops and food stands had closed. The line for the train had hardly shortened, but we got in the 2 hour queue anyway. Considering the circumstances the crowd was orderly and in good spirits. We finally got back to Manhattan about 1:30 am and were exhausted, but no matter; for we were smiling from ear to ear.

One thought on “Super Bowl”