We were up and out by 6:30 walking towards the walled section of the old town to ensure our entrance for the 8am running of the bulls. The night before we had hoped to turn in early and get a good night sleep, but that doesn’t happen in Pamplona during the festival of Saint Fermin. We passed staggering groups of revelers still up from a long night of debauchery.

Jean Paul and myself were going to run, so we made plans to meet Katie and Helen when the run was over at the Hemingway statue outside the bullring. 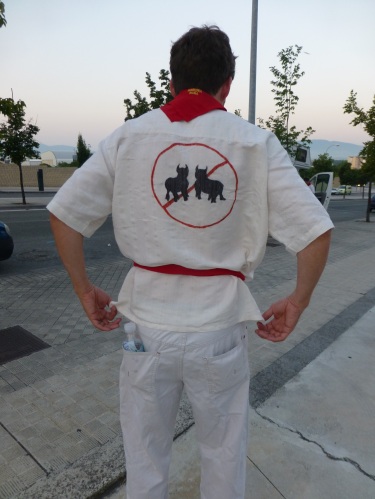 Helen and Katie made this for me to ward off ‘toros’.

We finally gained entrance and went to a spot we had scoped out the night before, a long uphill straightway with  small doorways to hide in if the sh*t hits the fan; It sounded like a good plan. Ten minutes later, the police swept up our section of the street and kicked everyone back outside the fences. We had no idea why, but I had a bad feeling this run was not going to go as planned. Undeterred, we were going to find a way back in. A group of about a dozen of us doubled back along the narrow streets and alleys at a full run – time was running out. We came upon Plaza Consistorial and crawled under two fences to regain entry, technically that was not allowed,  and so we ‘lucky’ to get back in.

The plaza was full of runners, we were only about 250 yards from the start but did not have view up the street to the pens where the bulls were to be released.  We quickly came up with a plan B; stay close to the fence, wait until the bulls passed and then follow them down the road. If it all went south, we could climb over the fence or dive underneath it. It sounded good in theory.

Eight o’clock was the time for releasing the bulls and as that time approached the nervousness of the runners was visible: Running in place, stretching their legs, nervous chatter. I tied my shoes a few times. The Spanish kid in his twenties next to us on the fence was sketching me out: kissing the rosaries on his wrist, kissing the cross around his neck, knocking on the fence three times, looking skyward. Over and over and over. Five minutes to go and the plaza started to clear out as people moved down the course; I didn’t know if that was good or bad.

Just minutes to go and suddenly a police officer climbs the fence and motions that he does not want us near or on the fence. We hear the sound of the cannon; the signal that twelve Spanish fighting bulls from the infamous Valdefresno Ranch have been released from the pens. A combined twelve hundred pounds of angry bovine, each armed with two spear-sharp horns were quickly closing the gap beyond our sight lines. The officer yelled “Huir!!” and pointed down the street away from the onrushing threat. Jean Paul questioned, “huir?” and the officer replied “Run!”. We both just looked at him, dumbfounded. With an urgency in his voice and a look of… “what are you? Idiots?”, he shouted “RUN, RUN NOW!’ and violently pointed down the street. Jean Paul instantly came up with plan C and screamed at me, “RUN!” We were off.

No bulls in sight but they must be close..It was an all-out panic run, arms flailing, head swiveling back to look for toros, then forward so as to not run into someone and fall, the last thing you wanted to do is fall and get trampled. After about fifty yards I took quick peek back, still no bulls, but I looked forward a little late and ran into Jean Paul: we both stumbled but kept our feet. I tried to regain speed and lost sight of Jean Paul. Suddenly, eerily, only a few people were around me and all those people I passed were stuck to the side of the street looking beyond me with huge eyes. I now heard the thunder of hooves on the cobblestone street. I looked back and fifteen feet off my back shoulder was a lone, monstrous salt and pepper bull hammering down the center of the street, his curved horns raising well above my head. The sight was shocking; it literary shocked the wind out of me. I angled off to the side of  the street as he passed me like a freight train. I looked back again and saw his buddies; a large group of jet black bulls in tight formation filling the street. That was it, like a deer in the headlights, I flung myself back into the stone wall on the side of the street trying to embed myself into the granite. I was stuck there motionless, petrified as they passed.

Medics with the injured

Twenty yards ahead of me the salt and pepper beast lined up an unsuspecting victim, lowered his head and hit him square with his horns, tossing him straight in the air. The victim landed on his butt; however after sometime on the cobblestones he was up, remarkably unhurt, but with the back of his pants completely shredded.

After the group of black bulls passed I tried to follow them further down the course, but the police shut a large metal gate to keep the bulls from doubling back on the crowd, no-one could pass. Was that it? It didn’t seem like twelve bulls had passed. With no bulls in sight, I wandered around looking for Jean Paul, not really paying attention. Suddenly the police are frantically opening the gate, not good; I look up the street- a group of steers were on their way. That’s great considering I’m now in the worst possible place; the locals call it ‘Muerto tripula la curve’ – Dead man’s curve! I’m out of here – run, jump for the fence and get half-way up before getting pinned by the crowd.  From above, I see the herd pass by, hitting no-one. I again try to follow but police close the gate again… and that’s it, over.

If I sound kind of bad-ass, i beg to differ; I did almost everything wrong. My dreams of grandeur, running the length of the course with one hand on the bull’s horn and triumphantly entering the bull stadium to flowers showering down from the stands had quickly given way to a terrified 100-yard dash pin-balling down the street and trying to run through a stone wall to get away. 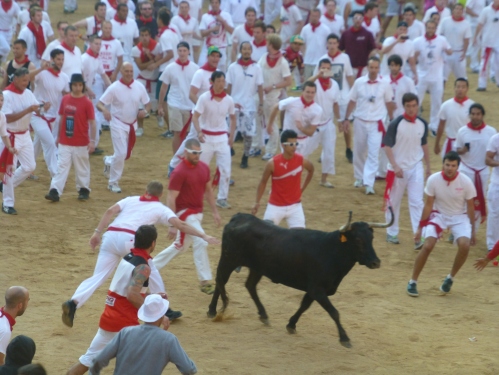 Runners in the bull ring with the ‘baby’ bull.

I climbed the fence to look for Jean Paul, I saw him approach and we both erupted into uncontrollable laughter; I jumped from the fence and gave him a hug. We exchanged notes; he did not fare  any better, running face first into metal door followed by ten of his closest friends.

We slowly followed the path of the bulls to meet up with the girls, occasionally doubled over with laughter sharing stores of our legendary ‘Run with the Toros’.

After the run at the Hemingway statue.