Posted on July 9, 2013 by holidaymistake

We were lucky to get tickets to the bullfight at the Plaza de Toros, one of the largest and storied bullrings in the world. On the opening night there were five bullfights and the matadors were on horseback when fighting the toros. We entered the outdoor ,circular stadium and sat on the concrete bleachers. There were a few tourist in the stands but the majority were Spaniards, both young and old, including many large families. It looked as if we were attending a religious cult event with everyone in the stadium wearing  white with red neck scarves.

The matador entered the stadium on horseback to the loud cheers of the crowd,  which immediately fell silent just moments later when the Spanish fighting bull, weighting well over a thousand pounds entered the ring. It was on. The bull charged and the horse danced out of the way at the last moment, while the matador threw short colorful spears. The spears accumulated and hung from the blood-soaked hump behind the bull’s head. After each encounter, the matador would play to the crowd, lifting his arms to loud applause. The horse and bull seemed to play a form of chicken. From opposite ends of the ring, they charged toward each other; the horse faked one way and then went the other just narrowly missing the horns. As the bull slowed down the matador hung off his horse by his legs and put his hands on the bull’s head, enraging the beast as they raced around the ring. The  agility and fearlessness of the horses amazed me the most, it was the horse that had the most to lose if caught by the toro. Once a bull momentarily fell and the horse ran over and bit it on the back. 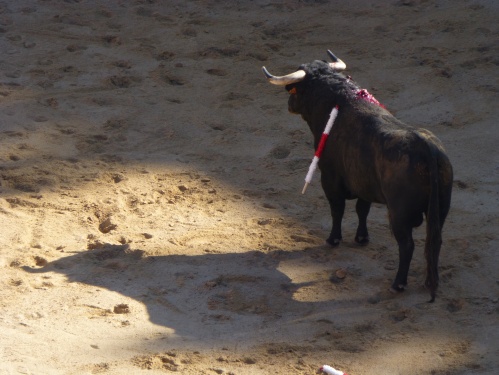 When the bull began to tire from loss of  blood,  three matadors on foot ran him in circles until he fell. Then the lead matador would pull out a long dagger, aim carefully and deliver the death-blow to the spine just behind the head. A team of horses quickly hooked up the carcass and dragged him from the ring. The matador took a slow walk victory lap around the ring, his hat in one hand and he severed the ear of his vanquished foe in the other. The crowd cheered, a few bouquets of flowers landed in the ring as the matador threw the ear to a female fan in the stands.

I went to this event with an open mind and tried to withhold judgement; who am I to judge a cultural practice centuries old?

That being said,  I was still troubled  and distressed  about the whole thing. I thought multiple glasses of sangria might help. It didn’t.