Using every avenue and all means possible, Helen was able to acquire tickets to three Olympic events this summer in London.  We stayed with our friends Jean Paul and Katie, and arrived just as they were preparing the house for a party that evening featuring Jean Paul’s vat of Indian curry. (Apparently a family recipe from the ‘old country’,  which was somewhat strange, since he is from the Basque). Helen and I took a quick nap, trying to ease the jet lag to rally for the party. We did pretty well staying up till around eleven. Pints of beer + jet lag + JP’s curry = sleep. 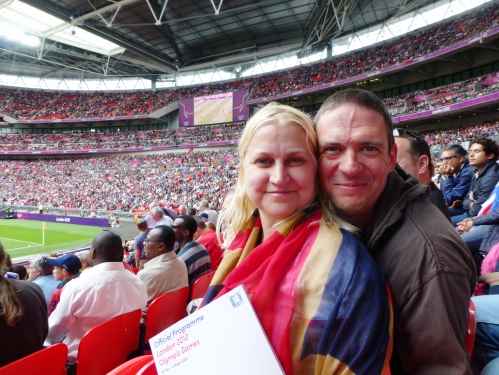 The first event was football, at the mecca for english football, Wembley Stadium.  We went with Helen’s childhood friend, Lucy and her husband Jamie, who were kind enough to give us their extra tickets. We lucked out; Team GB was playing Senegal in the second game. Wembley Stadium is state of the art with Jumbotrons and plush seating with some old-school rules. You are not allowed to bring beer into the stands, because back in the day when drunk lager louts/football hooligans used to beat the crap out of each other in the stands. I was wondering why so many people were loitering in the concession area pounding down beers.  You either had to chug beer in the hallway or sneak beer into the stadium in coffee cups. We did both.

Beach volleyball was next. The large temporary stadium was built in the courtyard of the old Horse Guard Parade. A strange sight; this modern modular stadium in the shadows of the 250-year-old buildings and on top of the jousting grounds of Henry VIII. Henry loved his jousting.

There was a commentator whipping the crowd into a frenzy and a DJ playing music between points. Between games they had a dance troupe in retro bikinis dance around the sand court or start conga lines that would dance around the stands. Beer drinking in the stands was commonplace instead of outlawed. We saw the powerhouse teams from Brazil, both men’s and women’s, and with it being  sunny for once in London, it did kind of feel like Rio.

The next afternoon it was tennis at Centre Court at Wimbledon, with four game scheduled. I was excited walking through the hallowed grounds with all its tradition and Pimm’s cups. It was the complete opposite of the beach party at volleyball the day before. The judges trot out and around the court in a line, with stiff arms, to their positions. The tennis balls are lined up before the game and rolled individually to the ballboys in a ritualistic fashion. The head judge calls for “quiet please” before the ball is served. We were lucky and saw some of the best players including the two eventual gold medal winners Andy Murray and Serena Williams. 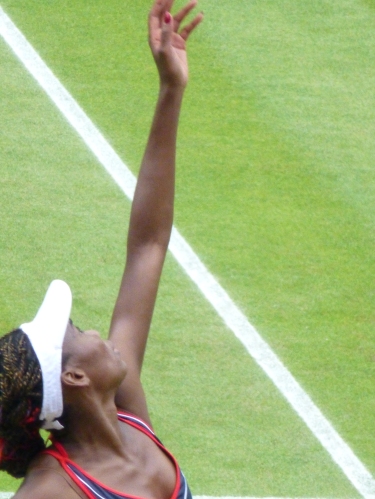 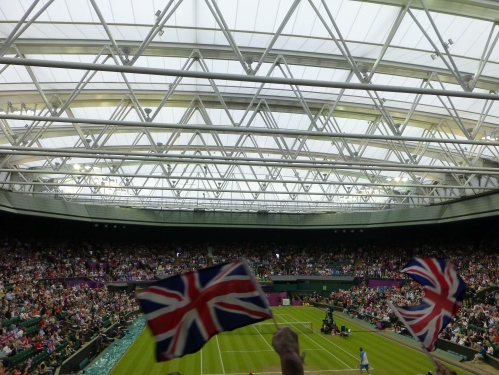 Team GB out in force at Wimbledon

It was a whirlwind trip with everyday packed with Olympic events or meeting with friends or family, full speed. When we got home, we needed a vacation to recover from our vacation.