Posted on October 25, 2011 by holidaymistake

The heavens broke and the rain chucked it down. We ran for cover to the first available cafe, ordered mojitos and sat out the rain. There was a Spanish translated version of  the 1970’s Banana Splits cartoon on the bar TV; bizarre.

We sat and watched a group of kids play under the torrents of rain pouring off the old church into the square. They were using palm fronds as a  sled, sliding down the brick entrance in front of the church, much to the delight of the girls’ school students coming outside to watch.

After a mojito (or two), this looked like a good time to me. I’m in.

The boys had no problem giving me a palm frond ride and the girls screeched in delight as the boys pulled The American down the brick path. Good fun, except for the wet ass. 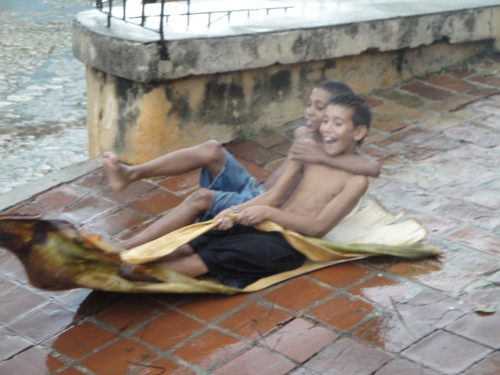 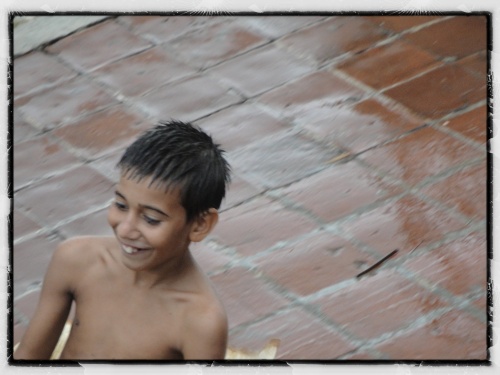 We ran into our friend William from our group and so before returning to our hotel, we decided to have one last mojito in a cafe next to a nearby ruined church: Iglesia  de Santa Ana. Turns out, our waiter had a friend with a ‘cab’ that could give us a ride back to the hotel. So we finished our drinks, and outside met  the cabbie, Antonio, who was talking to our waiter in front of his 1952 Ford Customline Forder.

It was five different shades of blue paint. No hub caps  and the body was half-bondo. Again, we are in.

To open the passenger door Antonio had to kick the quarter panel just behind the front wheel and only then it would open like magic. We hopped in, and were off for the 15 minute ride to the hotel. The large bench seat in the back was loose: there was no interior panels for the doors, and of course, zero suspension. 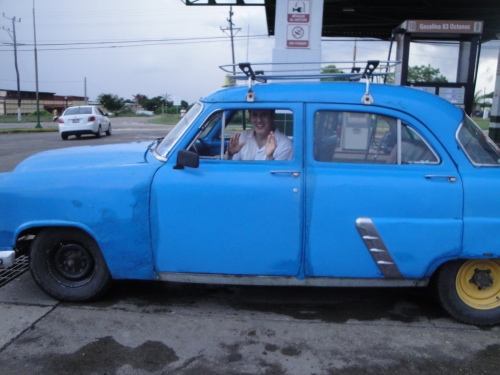 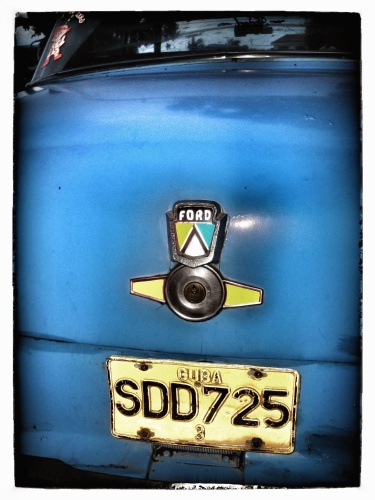 Halfway to the hotel,  Antonio turned back to Helen and said, “I have something for you”. He reached down and pulled the shifter out of the floor and handed to her. Somewhat confused, Helen reluctantly took the 2-foot, old school shifter not really knowing what to do with it.

A minute later, somewhat suddenly, as we approached an intersection, Antonio asked for the shifter back, as he needed to downshift! He took it back, stuck it in the floor and dropped a gear. 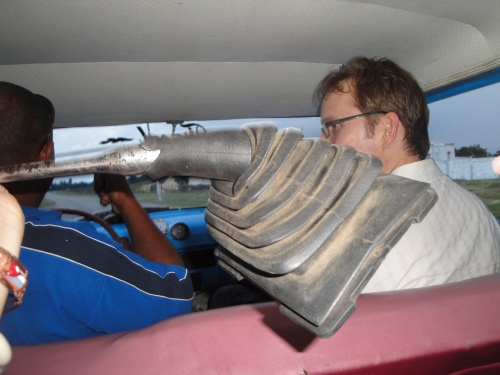 Antonio then asked our friend in the front if he wanted to drive, and after some prodding, William (a rather shy, US government employee) grabbed the wheel and drove from his spot in the passenger seat. Antonio, in broken English, then asked both of us if we wanted a go, and instantly Helen jumped over to the front and was driving the Forder from the passenger seat.

I politely declined,  2011 hadn’t been the luckiest year for me and it seemed like a disaster in the making.

We finally arrived (almost in one piece) at our Cuban Club Med style beach resort on the endless beach of Playa Ancon, 50 km east of Playa Giron (Bay of Pigs). We thanked Antonio for a memorable journey;  took a group picture in front of the Ford, gave him a healthy tip and he was on his way. We had survived another Cuban cab ride. 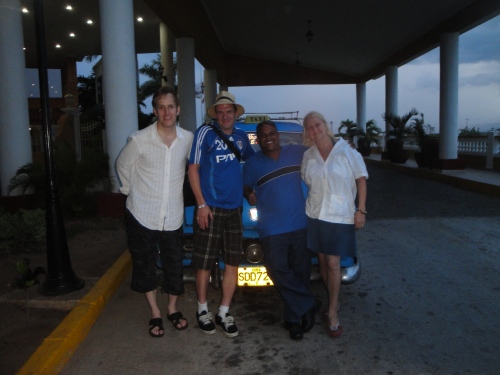