Posted on October 20, 2011 by holidaymistake

One night we decided to go to a few bars we had read about, outside the tourist area in Havana. So we  hailed a Coco-cab which looks like a over-sized lemon with three wheels. It’s basically a motorized trike with a large round yellow canopy that cover the bench seat where the fares sit. We chatted with our driver,  Peter, as we buzzed through town to the seedier area and a bar that was rumored to make some of the bast mojitos in Havana.

When Peter suggested he come and pick us up a little later, we agreed and walked into Puerto De Sagua which has a nautical theme; Helen loves a themed bar.

Instead of windows it had portholes  that were small individual fishtanks with brightly colored tropical fish swimming inside. We were the only ones in the lounge and so we sat at the bar and ordered “dos mojitos” from our bartender, Raul. We talked with him within the confines of our limited comprehension of each others language and he proceeded to make our mojitos in front of us on the bar. The rumors were true, it a was a damn good mojito. 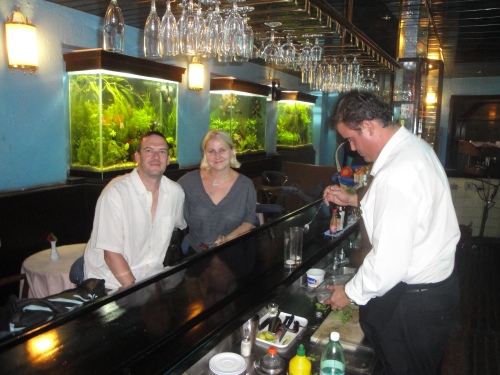 Every so often, a waiter would come in to watch the Columbian MTV on the small TV behind the bar. Columbian MTV is like a over sexed music video from the 80’s: lots of skin.  This kind of South American fluff television is the only international television piped in for the general pubic: soap operas, sports, music videos. The fancy tourist hotels get more international television including American channels, Although I did read that an occasional American sitcom, including Friends, did make it on government TV. 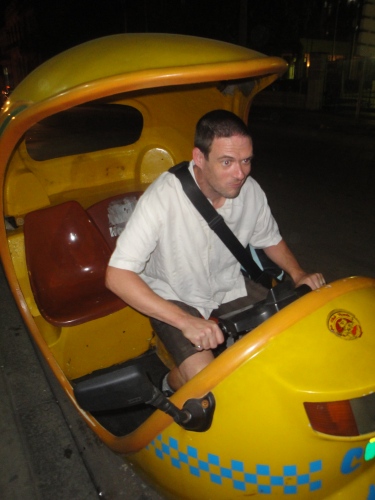 Peter was at the door;It was time to go, so we downed our second mojitos and hopped in the coco-cab and were off to an old Hemingway haunt, El Floridita, where he invented the daiquiri in the 1930’s. Peter dropped us off and said he would wait outside for us; implying heavily, in his opinion, that this place was not as good as the last.

Nice place: but a little sterile and touristy, kind looked like an old school ice cream parlor, with a four piece cuban/ jazz band. I’m sure it was a little  grittier in Hemingway’s days.

They had a life-sized bronze statue of the writer at the end of bar. We ordered two daiquiris and took some with pictures with Papa and enjoyed the band. Not our favorite place that evening, but a damn good daiquiri.

Now with just enough rum in our veins, we hopped in the coco again and Peter started off back to the hotel. We buzzed through the downtown past the bullet pock-marked former presidential palace of Batista, (now the Museum of the Revolution) and we started down the road that ran along the ocean, called the Malecon. Shortly Peter started to turn off the Malecon back inland and he turned to us, “perhaps we  go through town? Malecon very wet with waves”.  But Helen and I started chanting drunkenly “Malecon! Malecon! Malecon!” and so Peter instantly change direction and we were back  on track, on the Malecon.

The Malecon is a 8 km sea road and promenade along the city historic quarters and along most of Havana ocean front. The boulevard is lined with buildings in various states of disrepair and couples stroll along the the seawall at all hours, a social gathering spot for all of Havana’s residents. The lack of traffic in Havana made it eerily devoid of cars on it’s four lanes. The  Malecon was built-in the early 1900s, but there was one minor problem, they built it a meter too short. At most high tides, the waves crash up and over the seawall, often closing the road.

But the Malecon was not closed on this night. Peter punched it and within a few minutes we were at top speed,  maybe 25 mph. Peter dodged and weaved around large puddles and ocean debris scattered along the Malecon. It was kind of full on, every few minutes a wave would crash over the sea wall and onto the road. We felt a little guilty, after realizing that the over-size lemon canopy protected us but not Peter, and he was getting the brunt of the waves crashing over the  Malecon!

Luckily we soon arrived at the hotel and Peter sheepishly said the fare was $20.  But he had been so great and was essentially our personal driver all night. So we doubled it and gave him $40.  $20 dollars for a Cuban can make a difference.  Between over-tipping and Helen buying every handicraft and artwork in sight we were like a two person Cuban economic stimulus package.