The Mermaid Parade is a local counter-culture parade with a nautical/mermaid theme and this was it’s thirtieth Anniversary.  It has a grass-roots feel to it, with homemade costumes and floats. No multi-national corporation sponsors. No Redbull, No McDonalds, No giant floating Mickey Mouse balloon. Instead we have parading in front of us a random assortment of people of all ages in random costumes. Zombie Mermaids, half-naked men on unicycles, politically conscious sea creatures. There were a few common themes: namely body paint and pasties and not much else. 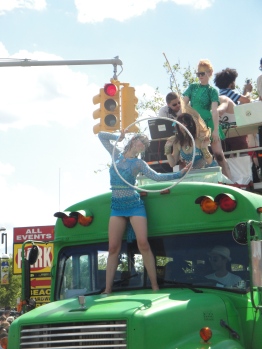 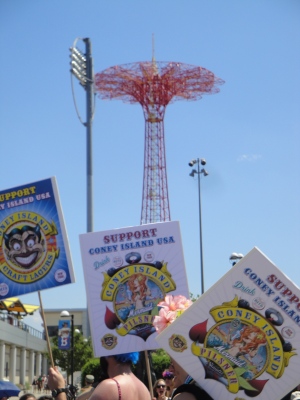 My eyes are burning.

Visually stimulating to say the least.

Coney Island is a little worse for wear, but still has an old NYC flavor to it. Gritty, multicultural, slightly sketchy, like Manhattan in the 80’s instead of the sterilized version we now see. The boardwalk and amusement park are still kicking, with The Cyclone and freakshows still attracting a few people. This was Coney Island’s day; sun beating down, stupid hot and the streets were packed.

We all stumbled back to the apartment we were staying at, just off the beach. Liz and Erik joked that we didn’t have to now visit the Irish tenement museum because we were staying in one. It was basically a shabby studio apartment with a bed and sofabed in the same large room. As my family, friends, and Helen can attest to, I am capable of doing strange things in the middle of the night……And at some point during the night I climbed into bed with Liz and Eric and went to sleep. Liz had to wake up Helen to drag me out of their (sofa)bed… and I don’t remember a thing. I’m sure the open bar at the aquarium had nothing to do with this! The running joke now is that we have to persuade Liz and Eric that I am a sleepwalker and not a swinger!

One thought on “Zombie Mermaids”